The Emir of Birning Gwari, Alh. Zubairu Jibril Maigwari, has advised all candidates vying for elective offices under all political partys operating in the state to honour all their campaign promises when elected into office.

The Emir gave the advice over the weekend when the 2019 Kaduna States gubernatorial candidate of the Peoples Democratic Party (PDP), Hon. Isah Ashiru, his running mate, Hon. Marshal Katung, PDP bigwigs in the state and other PDP candidates under Giwa constituency, paid him a courtesy visist in his palace before the take off their campaign rally in the town.

Meanwhile, 245 women, described as politcal grass roots mobilisers for the All Progressive Congress (APC) in Birning Gwari Local Government Area (LGA), have said they could no longer remain in the APC after what their leader described as, “ravaging insecurity and unacceptable hunger” has made the APC a party that does not care about the welfare of its members and its electorates. 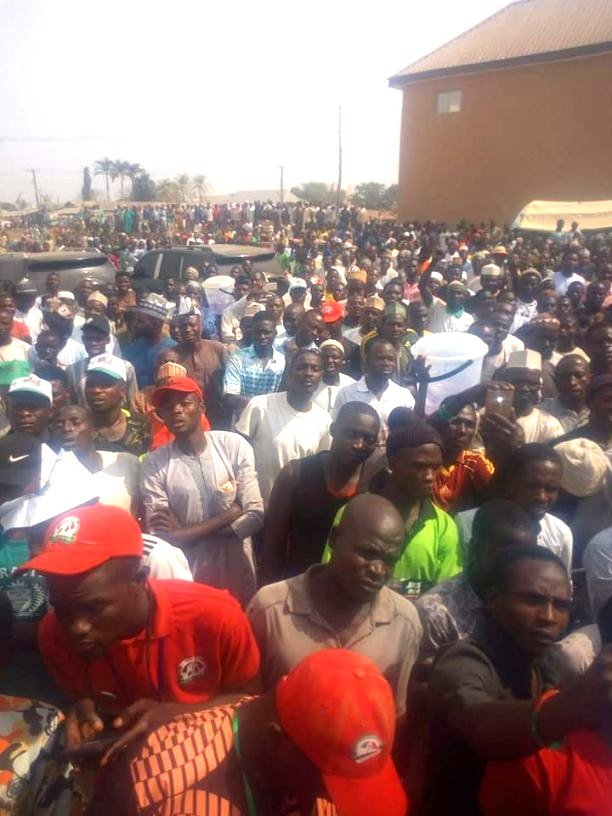 The Emir, who had in past cried severally for sustainable intervention to end kidnapping, armed robber, calltle rustling and sundry crimes in Birnin Gwari especial in the past four years, told his quests that it was very important that politicians kept their promises when voted to offices.

He said: “i am happy to welcome you to this palace . I know many of you who are on this entourage dating back many years ago. I am glad to have you here,” he said.

“I know Ashiru very well. He is like a son to me. All I want to advice him is a principle that is me, which has been afirmed by prominent Islamic teachings, ‘power is given by Allah, and power is taken by him and given to whosoever he choses’,” he said.

“You all know the problem that Birnin Gwari has been facing over insecurity. All I want to advice is that who ever is voted into office, should do whatever he can do to make sure he fulfills all his promises made during his campaign. That applies to all candidates here. As a royal father, my assignment is to advise you to be of good conduct with your supporters, and to ask for Allah’s blessings on your desires,’ he said.

Speaking earlier, Hon. Ashiru told the Emir that he was not in the palace to play politics but ask for blessings and guidance.
“Your Royal Highness, this palace and your presence here is too noble and dignified for politics.

As a loyal son, I have come to my father with my people to seek for blessing and words of wisdom that will guide us in this journey. I have also no right to barge on this historical Emirate and just seek for the votes of your subjects, without your consent.”
The rally which held in open square in the town, attracted a huge crowd.

The PDP Senatorial Candidate for Kaduna Central, Mallam Lawal Abubakar (Mr. LA) told the gathering that he was very depressed with the grim insecurity in Gwari:
“Birnin Gwari shall be free from the grips of bandits and gangsters when Alh. Abubakar Atiku is voted to power and Hon. Ashiru becomes governor of Kaduna State when you vote them.

“If you vote me as your Senator, with our House of Reps and Kaduna State House of Assembly candidates, you can be assured that we shall we shall never sleep as long as Birnin Gwari does not sleep. That is the reason why Alh. Atiku has consistently mentioned Birnin Gwari as one of his main areas of intervention when voted to power.

At the venue, not less 245 women, described as the female foot soldiers and votes schemers of the APC in Birnin Gwari LGA left the APC for the PDP at the campaign rally.

A few of the women who took turn to speak, all cited worsening insecurity and rash poverty arising from poor welfare of the APC.

“I am well known in this town and surrounding areas for my role in ensuring that the APC won in 2015, ” said Hajia Gambo Alhassan.

“The APC has allowed ravaging insecurity to take over Birnin Gwari, coupled with hunger and other problems, contrary to its promised in 2015.

“Everyday when our husbands and sons go out to look for daily food, we are not sure if they will return. You may even be sleeping in your house and bandits will come and take you away.

“My own pregnant daughter was kidnapped for 11 horrifying days before she was released. The APC has deceived us. Today, your husband may come home from work, just to be told that he has been sacked from work. There is no certainty; there is no life under the APC. That is why we the women that worked for the defeat of the APC in 2015, have repentantly returned to the same PDP to chase away the APC,” she said.