Kaduna: SHAWN II, Giving a New Lease of Life to 354 Communities in 3 LGAs

Nigeria – Over three hundred and fifty four (354) communities in three  Local Government Areas (LGAs) of Chikun, Kubau and Kachia in Kaduna State has so far benefited from the Sanitation, Water and Hygiene in Nigeria, otherwise known as SHAWN II, a project funded by Department for International Development (DfID), a United Kingdom government department responsible for administering overseas aid, and United Nations Children’s Fund (UNICEF), with counterpart funding from the kaduna state government. 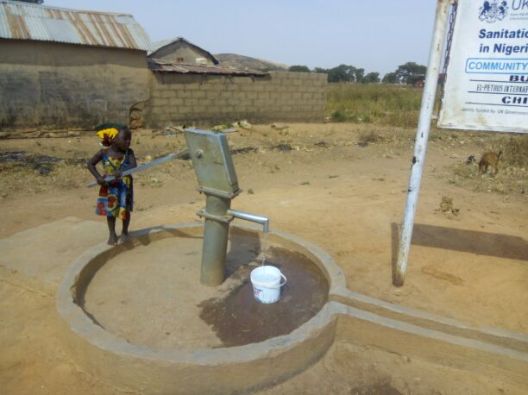 And an estimated population of two hundred and sixty two thousand six hundred and eleven (262, 611) are currently enjoying free access to improved water supply through over three hundred and twenty five (325) newly constructed and two hundred and forty four (244) rehabilitated hand pumps and motorised boreholes in the 3 LGAs.

A visit to some of the communities shows that, apart from the water projects which is now being enjoyed by the people, a new hygiene behaviour, such as regular sanitation of their environment, regular hand wash, maintainance and consistent use of toilets rather than defecating openly has also been adopted by the locals.

A View of a clean environment in a rural community of Angwan Bukka in Kujama ward, Chikun Local Government Area of Kaduna State, currently benefitting from SHAWN II by DFID and UNICEF. Photo by Alex Uangbaoje.

Jumai Bala, a house wife in Angwan Bukka village, Kujama ward, Chikun Local Government Area in the state explained that “what you see here is not a  magic, before UNICEF people came here our village use to be very dirty, but after they thought us the danger  of not keeping our environment clean, we quickly adjusted.

“And you can hardly find toilet in this village before, but now almost every household have a toilet and they are very clean. Now we hardly fall sick like we use to because they told us that some of the illness we used to experience were as a result of dirty environment and unclean water from our wells and other water sources.

“As you can see they provided with and safe drinking water and we hardly use the water in the wells because of the borehole. I appreciate the state government for partnering with UNICEF and  DFID to bring this project to our community.”

A community leader at Ungwan Tudun Mabuga in Kubau LGA, also noted that “before UNICEF brought this borehole to our village, we never had access to portable water, we use to drink water from a stream and whenever there’s dry season, it is always hell here because the stream do dry up.

“This is the only water source around now, but is good, it has reduced our suffering as far as water is concern, if you look down there you can see that they are also building us toilets, both for the community use and another one for the school. I thank UNICEF, and Kaduna state government for selecting our village to be part of those who are benefiting from the project.”

Speaking on the success of the project so far, Chief of Field Office, UNICEF Kaduna, Utpal Moitra noted that Provision of water is a fundemental right of every human being and that, that basic right as important as it is, is being challenged and not readily available.

“This is what SHAWN project is trying to provide. SHAWN is an example by which some of these basic  rights are fulfilled and delivered and we just need to have patience with the government so that LGAs and communities within the state have these basic rights.

“SHAWN provides the way and example to share and work with government to say that making this right available for citizens is possible. I think we need to understand SHAWN project from that perspective. SHAWN gives us confidence that it is possible, it is now left to us to find how we want to do it or how any state government should do it.”

“We need to drive the campaign of handwashing in Kaduna, it is something we need to find a way to do alongside RUWASA. We need to make it a regular state campaign.  I called on the media to help inform the public on the importance of hand washing. It’s a simple thing to do and it doesn’t cost much just rob your hand with soap, wash with water and it will protect you from all sort of germs.” he added.

According to her, “1,017 communities were already triggered for the attainment of ODF status, while 502 communities as against the targeted 190 in the 3 pilot LGAs were already certified ODF. 138, 882 pupils in 370 primary schools in Chikun, Kachia and kubau LGAs were engaged in group handwashing as routine practice using Tippy Taps.

“370 primary school teachers have been empowered with the capacity to promote hygiene practice and management of school WASH facilities in the 3 LGAs. 8, 854 caregivers in 19 health centers have access to WASH facilities, while 8, 800 caregivers were referred to health facilities for immunisation and birth registration services through inter-sectorial convergence with Health and Child Protection in the 3 SHAWN LGAs.”

On the maintainance of the projects, she said WASH Committee was setup in every benefitting community. This committees according to her, are saddled with the responsibilities of looking after the projects to ensure they are properly used and of vandalism, adding, “41.15% of WASHCOM members are female with 633 of them occupies leadership positions in the 3 LGAs. 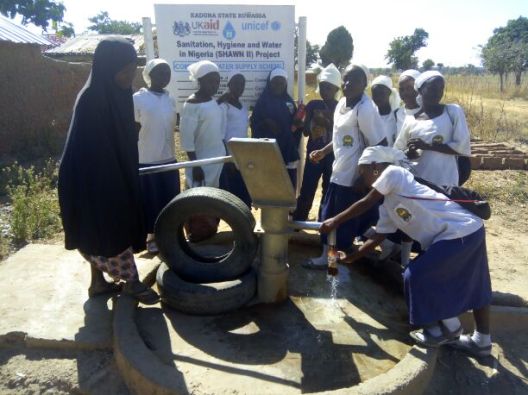 Bashir Lere, Programme Manager, Kaduna State Rural Water Supply and Sanitation Agency (RUWASSA), explained that the state under governor El-rufai have spent over N818 million on the SHAWN project between 2015 and 2016.

“N698 million is already enmarked for 2017 scale-up of intervention in the SHAWN projects and we are hoping that base on the performance of the state before the second quarter of 2017, additional LGAs will be added.

“From inception of the programme to date, Kaduna State has been able to fulfil it’s part of the counterpart agreement with development partners in terms of funding. The government is fully committed, and the unwavering commitment of the government has raised the profile of the state among the comity of six states that are participating in the programme.”