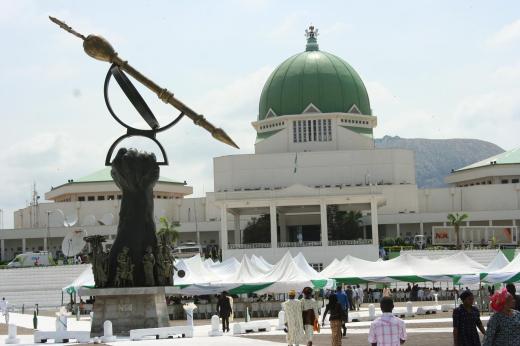 President Muhammadu Buhari has appealed to the national assembly to pass the statutory budget of Niger Delta Development Commission (NDDC), 2016.

The president also urged the lawmakers to consider four other bills which he had sent to them.

The bills are: money ‎laundering and prevention bill of 2016‎, bills for acts for domestication of agreements for avoidance of double taxation between Nigeria and South Korea, Spain and Sweden respectively, mutual legal assistance in criminal matters bill, 2016 and the federal capital territory appropriation bill, 2016.

The president made the appeal when he hosted the lawmakers to a dinner at the presidential villa in Abuja on Monday.

He said without the approval of the national assembly, the NDCC and FCT would not be able to execute their statutory mandate or incur expenditure for the year.

“I seize this opportunity to please draw attention to the under listed bills which have been submitted to the national assembly and appeal for accelerated consideration and passage,” he said.

“May I appeal to you to consider and pass these submitted bills particularly the statutory budget of the Federal Capital Territory and the Niger Delta Development Commission’s budget.

“These bodies cannot execute their statutory mandate nor incur expenditure unless their budgets are approved by the National Assembly.”

‎Buhari ‎also promised to uphold the principle of separation of powers, saying under his watch, the executive will not interfere with the functions of the executive, legislature and the judiciary.

“I hereby restate the commitment of this administration to observe the principles of separation of powers which defines and delineates the functions and powers of each arm of government. Thus far we in the executive have restricted ourselves to our constitutional roles‎.

“Therefore I, as the president, and we as the executive arm of government will not interfere in the functions, functioning and process of the legislature nor the judiciary. In the same vein, I urge other arms of government to please appriase and ensure that each action conceived and taken by it is in strict accord with its constitutionally limited powers.

“I urge you as legislators and the legislature to take out time and communicate with your constituents and other Nigerians, the policies of the government which are based on laws approved by the national assembly.”

In his speech, Senate President Bukola Saraki, who is the chairman of the national assembly, thanked the president for the invitation.

He also congratulated Nigerians for undergoing 17 years of uninterrupted democracy, describing it as a no mean feat.

“It is not easy for a country to go through 17 years of uninterrupted democracy and also to be able, through electoral process, decide in changing one government to another,” he said.

“We will request for more and more of this kind of interaction, now that the budget has been released the food will be more sumptuous. It will strengthen our relationship with the executive and solidify the democracy of our country.”