Worried about increasing number of people dying as a result of Meningitis type C outbreak in some parts of Nigeria, United Nations Children’s Fund ( UNICEF) on Monday said the organisation is delivering about 850,000 ‎doses of meningitis vaccines to Sokoto State Government to help curtail the outbreak.

Mohammad Mohiuddin, UNICEF Sokoto Chief of Field Office, disclosed this in his office when he played host to a team of Journalists.

According to him, UNICEF has already delivered about 100,000 doses of the vaccine to the state government.

“We have the Community V‎olunteers mobilizers at the community level, we have the LGAs consultants and we have our whole network of Communication for Mobilization.” He said.

Mohiuddin, commended the state government for her efforts, adding “the Commissioner of Health is very hard working and committed and all his team are taking the outbreak very seriously.” ‎‎

Confirming the first batch of receipt of the vaccines from UNICEF, Incidence Manager, Emergency Operations Center, Sokoto, Dr. Aminu Shehu, noted that over 97,200 doses of the vaccines are already in the custody of the state government.

He explained that, since the outbreak of the bacteria, the state has responded well,  in collaboration with other partners like UNICEF, by providing drugs for patients. 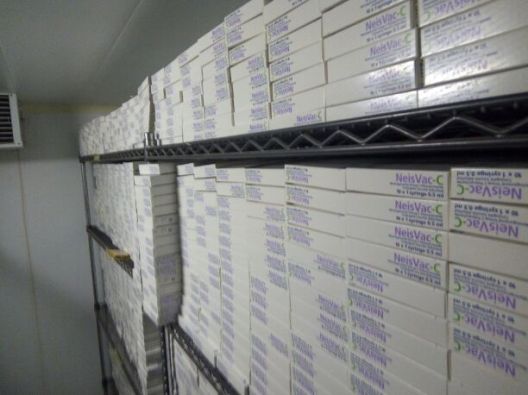 “‎We  have a state of the art laboratory where cases  are analysed and treatments are promptly administered.  Many at times even before the confirmation once the symptoms are there we commence treatment. ‎

“We have Different teams on ground working together to tackle the menace and these includes  surveillance,  mobilization, vaccines and we get reports and feedback through the ministry of health.

“Currently, we have 33 confirmed cases in the state, which have been treated and discharged. But apart from these there are over 1000 suspected cases.

“The situation is that when someone is down with fever and neck pain, they immediately rush to the Center to say that they have Meningitis and you cannot say you will not treat them until the test results are out.‎” He said

‎He however, revealed that vaccination exercise and campaigns will commence on Thursday 27th April 2017  in 9 Local Government Areas.