Mama ACCIF, as she is fondly called by numerous Internally Displaced Persons (IDPs), in both New Kuchingoro and Pegi-Kuje in the Federal Capital Territory (FCT), Abuja, who have had an encounter with her in one way or the other, Barr. Ranti Daudu is the Executive Director of All Children Charity International Foundation (ACCIF).

ACCIF, had in June ‎2016, commenced a seven months training on skills acquisition for 55 IDPs in New Kuchingoro and Pegi-Kuje IDPs settlement camp, after successfully completing the first phase of the project.

About ‎50 IDPs were trained in the first phase of the programme in 2015, between the month of June and December in various trades such as: tailoring, shoe making, fish farming and poultry, which took place at TY Danjuma Foundation and ACCIF training centre in Pegi Kuje and Abuja @30, Abuja. ‎

‎The projects which were financed by TY Danjuma Foundation (TYDF), provided starter packs ‎worth N14 million to the 55 beneficiaries of the 2016 project‎.

The tailors received Sewing machines, cutting tables, electric and charcoal pressing irons and other start up materials. While the shoe-makers got Hand sewing machines, filling machines, generators, tables and other shoe making tools and essentials. Two (2) gringing machines were also donated for communal use in both camps. ‎

‎In his remarks during the graduation in December 2016, Executive Director, TY Danjuma Foundation, Dr. Udo Sunday, who was represented by Finance/Admin Manager, Shuaibu Ade-adebayo, commended ACCIF for showing integrity with the funds given to them by TY Danjuma Foundation.

He added, “They have shown accountability and transparency for the money given to them, and I want to say also that we will continue to partner with ACCIF because we believe they are an organization to reckon with.‎”

And forty five (45) after, the beneficiaries speaks about “Mama ACCIF” and the impact of TYDF-ACCIF empowerment project;

‎Markus Yakubu, from Chibok Local Government Area, said, “knowing ‘mama ACCIF’ is the best thing that has happened to our life since we came into this camp, her contact with us turned our tears to joy”.

According to him, “I never believe i could do this in my life, TYDF-ACCIF has helped me to accomplish so many things in no distant time. Initially, i could not handle the welding machine but now I am perfect. I don’t know what to tell ‘Mama ACCIF’.

“The training has really helped us.  Now we have a job at Kubwa doing burglary proofs for a school and the Church of the Brethren in Nigeria, LCB Pegi, Kuje Area Council of the FCT, Abuja. We’re constructing them there because to buy materials and ferried them down here for construction will be very expensive. That’s why the church decided that we go to Kubwa with the engineer we’re working with and carry out the construction, and after this job is completed we’re going to Jos for another job.

“Today, as a Welder I can train and replicate about 100 of my kind and as I’m talking to you now 2 people from outside the camp are under my training and I am already making money.”‎ 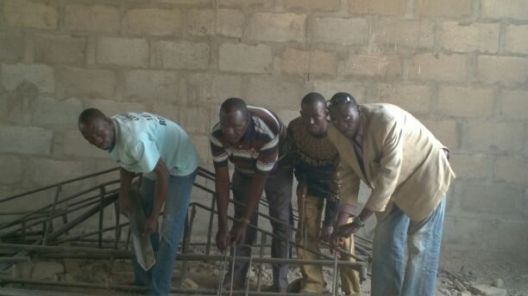 ‎Thomas Sander, is another beneficiary, he hails from Chibok Local Government Area of  Borno State,‎ he hope to return home with the skills he has acquired as soon as insurgents in his area are fully defeated.

‎Sander thanked TYDF and ACCIF for coming to their rescue, and promised to ever forget the gesture done to them especially the motherly love demonstrated by ‘mama ACCIF’.‎

“For now, I’ve not been able to secure a shop and start my business fully; when I do, I will train/teach others. Some have started coming to me that they want to undergo training.‎

“After our graduation, what I’ve been able to do with the few welding jobs I’ve done is what I can’t quantify.  I used part of the money for my family upkeep, and also buy some materials for the business.‎” he said. 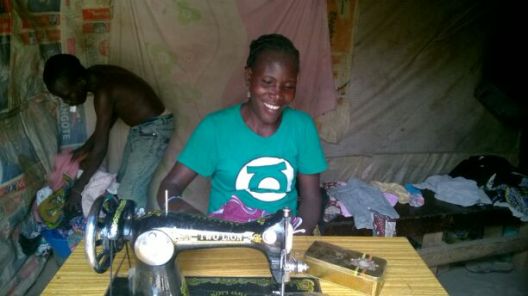 ‎Asabe Emmanuel is a mother of  two, from Gwoza LGA of Borno, a beneficiary whose area of skill is in Tailoring service.  Asabe who spoke through an interpreter, said the programme has helped her solved the problem of idleness in the camp as her husband is currently not working.

But she said, “i began to work with the equipments donated to her by TYDF/ACCIF, she can now take care of her from the money she is making. Asabe, added, “apart from using the money for the upkeep of my family, I am also making some savings. I thank TYDF/ACCIF for the training and setting up the business for me. Currently i have 3 trainees under me here in the camp.‎

“Between January and now, I have been able to save N15,000, and I don’t have any other business yet apart from the tailoring. My hope is to have a shop in the camp or relocate to Nasarawa state to settle with my family there.‎”

Martha Yohanna, another mother of seven from Gwoza LGA, of Borno State, whose husband is a famer has this to say, “TYDF/ACCIF have helped me a lot, I now sew cloths for my family and customers thereby making money for the family. The training has greatly changed my entire life.

‎”As we speak now, I already have 2 training learning under me, and I give them little money to support them too. I have made over N32,000 in less 2 months, while I save part of the money, the remaining is put back into the business to purchase some materials.”‎

‎Elizabeth Philemon, who also benefited from the project is a mother of six, from Gwoza in Borno state, explained that family, friends and customers now thronged her shop as she is now being seen as a hope for so many.

“I will never forget TYDF/ACCIF in my life, they made me what I am today. I brought in‎ 2 people who are now receiving training under me. And I been able to save upto ‎N15,000, and also the business of selling fresh cow milk(Kindirmo).‎” she said.

‎Yusuf Adamu ‎(23), from Gwoza LGA of Borno state, has so far realized over sixty-thousand Naira (N60,000), after his graduation. He hoped to return home to impart his community with his knowledge of shoe making.‎

‎25 years old Innocent Yakubu‎, married with a kid, a Shoe maker, thanked TYDF/ACCIF  for the life changing programme they through. According to Innocent, “I did not expect to do something that could fetch me money in my life like this.‎

“Today I can boast of ‎N40,000 in my savings, and have also invested some money in my business for purchase of materials.‎ He added. ‎

Peter Muta, another beneficiary of the TYDF/ACCIF from Chibok LGA of Borno state, thanked TYDF/ACCIF for helping him realize his dreams that always seems lost to boko haram.‎ Is currently training 2 persons on the job.